Well-known for its use as a spice, Cinnamon bark also has many health-promoting benefits and ancient Chinese used this is almost every medicinal cocktail they prescribed.

According to Aroma Tools (2018) - "This oil fights viral infectious diseases and testing has yet to find a virus, bacteria or fungus that can survive in its presence".

Cinnamon is derived from a tropical, evergreen tree that grows up to 45 feet high and has highly fragrant bark, leaves, and flowers. Extracted from bark, Cinnamon oil’s stimulating aroma supports that get up and go feeling during the Winter months. Cinnamon has a long history of culinary uses, adding spice to desserts, main meals, and hot drinks. Only one to two drops are needed as a food flavour. Blends well with Wild Orange, Clove, Myrrh and Douglas Fir essential oils.

Diffusion: Use one to two drops in the diffuser of choice.
Food flavour use: Add 1 or 2 drops to food.
Learn More

One of the lesser known benefits of Cinnamon Bark essential oil is its powerful cleansing ability. It can be used to make a natural surface cleanser by combing with water and white vinegar. Cinnamon freshens breath and helps maintain clean and healthy-looking teeth. For an effective mouth rinse, add one drop of Cinnamon to two ounces of water and gargle. Cinnamaldehyde supports the health of the gastrointestinal tract* and gives Cinnamon its strong cleansing properties.

Keep out of reach of children. Possible skin sensitivity. Avoid contact with eyes, inner ears, and sensitive areas. If you are pregnant, nursing, or under a doctor’s care, consult your physician.

Cinnamon was one of the first known spices. The Romans believed Cinnamon's fragrance sacred and burned it at funerals. 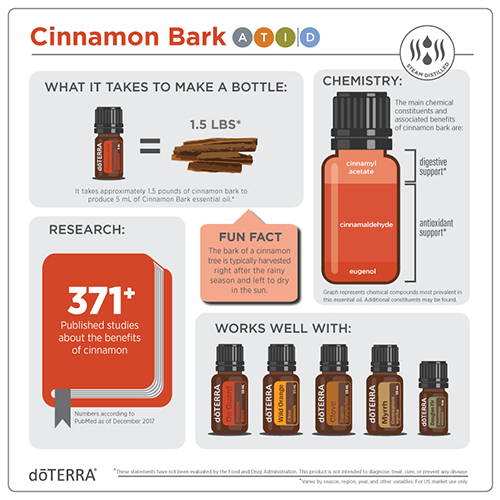